Barnett Vineyards is located at the very top of Spring Mountain, at its peak of 2050 feet, well above the inversion layer of fog that blankets the Valley floor below. Due to the inversion layer, this unique microclimate influences the mountain vineyard by allowing up to 3 hours more sunlight per day. The additional sunlight is a critical element in why Barnett Vineyards’ fruit achieves more consistent ripening and flavor development vintage to vintage. During the afternoon, breezes come in from the Pacific Ocean creating a desirable cooling influence on the vines and thus benefiting the fruit development even more.

The estate is a 100% hillside vineyard with a dramatic series of steep terraces planted exclusively to the red Bordeaux varietals of Cabernet Sauvignon, Cabernet Franc, Merlot, and Petit Verdot. The vineyard is planted in blocks specifically contoured to the steep 35-degree + slope and soil conditions of each carefully selected varietal planted on the estate. The soil is extremely rocky and porous, resulting in additional stress and vigor on the vines and small clusters of rich intense fruit. The estate’s average yield is less than two tons an acre and often closer to one ton depending on the vintage.

Rattlesnake Hill is the highest point on the estate, approximately 2050 ft. elevation. The vineyard has a slightly added advantage of elevation, sun direction and less mineral content in the soils. The result is tiny clusters with deeper fruit concentration. Yielding barely one ton per acre, Rattlesnake Hill, Cabernet Sauvignon is extremely limited.

“I purchased the original parcel in 1968, and have been adding land and planting and replanting vineyards ever since. In a "mountain" vineyard the soil, exposure, and steepness vary constantly, and so we plant where it is appropriate, and where it is not we have wild and beautiful forests. The result is a marvelously complicated pattern of grapes mixed with native forest. We grow 15 different grape varieties—in nearly 50 individually named blocks—hence the curious names you may find on labels of wines made from our grapes, such as "Horseshoe," "Arena," "Dynamite Hill," and "Track." I named our property "York Creek Vineyards" in honor of the defining feature of the land, the wild and beautiful creek, which flows all year—undisturbed by the hand of man—for a mile and a half through thick forests and redwood groves. “ – Fritz Maytag

Planted on a mix of well-drained Boomer gravelly loam and Felton loam, the vines are head trained (no trellis) and spur pruned. There is minimal intervention in the vineyard during the growing season, in keeping with the tenets of sustainable farming. These measures, along with gentle hand harvesting in the fall, ensure that the unparalleled intensity of the fruit is expressed in the finished wine.

The valley is formed by Dry Creek, a tributary of the Russian River, and is approximately 16 miles (25.7 km) long and 2 miles (3.2 km) wide. The appellation benefits from the close proximately of the Lake Sonoma reservoir for irrigation in this relatively dry area. At the turn of the 20th century, Dry Creek Valley was one of California's most prominent producers of Zinfandel. During Prohibition, much of the valley was converted to plum, pear, and prune trees, and much of the fruit was processed by Sunsweet Growers in Healdsburg. Since the resurgence of wine grape production in the 1970s, Cabernet Sauvignon and Zinfandel have become the most planted varietals, and Dry Creek Valley AVA has become one of the state's top Zinfandel producers. Sauvignon Blanc has become the most important white grape varietal produced in the valley. 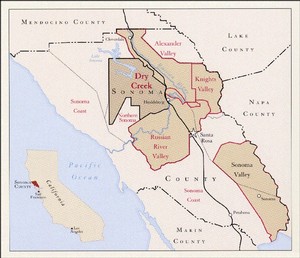 One of the smallest AVAs in size (16 miles long by two miles wide), Dry Creek Valley is a dense concentration of floor, benchland and hillside vineyards. The valley was created by the uplift and subsidence along ancient earthquake faults and the deposit of alluvial material. This soil deposited over thousands of years on the valley floor is primarily gravelly and sandy loam – deep, well drained and fertile dirt that produces good crops of flavorful grapes. The soil on the surrounding benches and hills is composed of gravelly clay loam, often strikingly red in color. This very rocky soil drains exceptionally well, helping to stress the vines late in the growing season, concentrating varietal character.

70 miles north of San Francisco and 20 miles east of the Pacific Ocean, Dry Creek Valley is ideally situated for wine grapes. Bordered by Lake Sonoma in the North and the confluence of Dry Creek and the Russian River to the south, the valley is classified as a Region II climate for grape growing (similar to Bordeaux region in France). Dry Creek Valley experiences both coastal and inland influences, with the nearby coastal mountain range keeping cool marine temperatures at bay, allowing for daily temperatures in the mid-80s, July-Sept. But these mountains also provide a conduit for the coastal cold air and fog to come in at night, dramatically dropping temperatures. Long, warm days allow the fruit to fully ripen, while coastal cooling in the evening enables the grapes to mature slowly and retain their acidity and balance. These are the perfect growing conditions for Zinfandel and Sauvignon Blanc, the region’s signature wines, as well as Bordeaux and Rhone varietals

When Vittorio Sangiacomo spotted his new homestead in 1927, we think he found a little slice of Heaven. Coming from the rough and tumble existence in an industrial age San Francisco, he found solace—and a sustainable business—in the beautiful Sonoma hills. Starting out as a fruit tree orchard, today, it’s clear that Vittorio’s selection for a homestead was his greatest legacy to us. In the Carneros AVA, Home Ranch is perfectly suited for Chardonnay and Pinot Noir, sporting 12 clone and rootstock combinations. And after more than 80 years, this is the place we still call home. 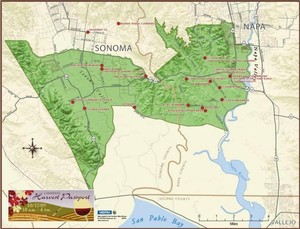 Windy and foggy. Those are two weather conditions that describe “The Rams”—the Carneros AVA. This cool appellation is situated on the northern edge of San Pablo Bay and experiences only moderate rain annually and very thin soils. Fog rolling in from the bay keeps the grapes cool in the strong summer sun—making this a prime growing area for cool-loving varieties such as Chardonnay and Pinot Noir. 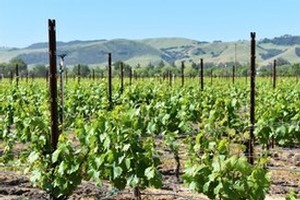 The soils of the Carneros region are predominately clay and very thin and shallow (approximately 3 feet/1 meter deep), providing poor drainage and fertility. The fierce and persistent winds coming off the bay encourages the grapevines to struggle and retain moisture. While this aids in keeping crop yields small, it can also delay the grapes from ripening sufficiently. In vintages with a long, drawn out growing season that allow the grapes to ripen, intense and vivid flavors can develop. Carneros Chardonnay is marked by its high acidity that can bring balance to the fatter, rounder Chardonnays produced in the warmer climate areas of Sonoma and Napa.

Sonoma County Green Valley’s nippy terroir ripens fruit slowly, causing many observers to regard this appellation as a frontier for cool-climate varieties. The viticultural area is a small swath of land that takes a southwestern slice from the larger Russian River Valley AVA. Because of its location, Green Valley has more exposure to the Pacific’s cooling effect. While most of the Russian River Valley is rated as cool, the Green Valley sub-appellation is even cooler. Considering the tender fruit crops that flourish here, such as apples and berries - fruit more associated with cooler places like New England and Washington State - one should not be surprised by local choices for wine grapes. These include the Burgundian varietals Chardonnay and Pinot Noir, as well as Alsatian favorites like Gewürztraminer. Green Valley is the first place where maritime fog enters the Russian River Valley through the Petaluma Wind Gap, and the last place where it burns off, making it the coolest, foggiest part of the Russian River Valley, substantially chillier than the Middle Reach, Laguna Ridges or Santa Rosa plain sub-regions of the Russian River Valley. The fog typically arrives in the evening, cools the vines, and then retreats in the morning. A 25º diurnal temperature swing is common. This maritime air conditioner extends the growing season and allows Pinot Noir to reach full flavor maturity while retaining natural acidity. It is not unusual for grapes to ripen into mid-October or later. 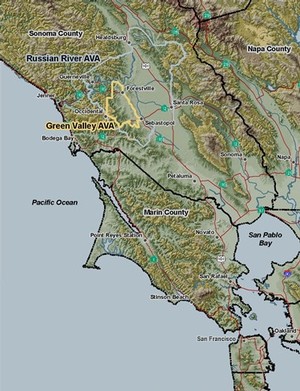 A series of orogenic (process of mountain formation) episodes near the Pacific Ocean created the mountains and streams that led to the geology of the Green Valley. The predominant (60%) soil type is Goldridge sandy loam, a low-nutrient, well-drained soil that is particularly suited for both Pinot Noir and Chardonnay. A hard sub pan limits root penetration, allowing growers to control yields. A second soil type, Sebastopol (Franciscan), also possesses good drainage.

At the inaugural Green Valley Symposium in 2004, the characteristics of Green Valley Pinot Noir were detailed. Lively acidity is typical, what is termed “ice cherries.” The Pinot Noirs are closer in type to the Sonoma Coast than the Russian River Valley except that the tannins are less masculine. Bright, intense, ripe dark cherries, black plums, wild berries, cola, exotic spices, rich earth, zesty acidity, and silky tannins are the norm. 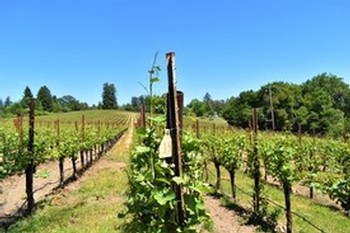 Ron Black and Stephen Bessone planted the 11-acre Tina Marie Vineyard in the Green Valley of the Russian River Valley in 2000. Gorgeous redwoods still stand vigilant over this beautiful property. They planted clones 115, 667 and 777 very densely on shallow Goldridge loam. Farmed meticulously and with yields kept to about 2.5 tons per acre this site embodies the best that the Russian River can offer.

The climate in the northern part of Napa Valley during the summer is warm to hot during the day, but as the heat rises in the late afternoon, the cool breezes and fog from the Bay funnel through the narrow "pinch" of the valley, creating a wide diurnal temperature difference of about 40 degrees F. This slows down ripening and helps create naturally balanced grapes.

The soil composition reflects the movement of water down the mountains and through the valley over the millenia, with larger, gravelly and sedimentary soils deposited near the foothills of the Mayacamas mountains to the west and south of the appellation, mixing in with the finer clay and loamy soils settling towards the valley floor to the east and north. The well-draining gravel soils fanning out from the base of the mountains were a desirable location for the 19th century pioneers to grow grapes of concentration.  Clone 8.  More concentrated fruit, lower yields.  Planted ~2001. 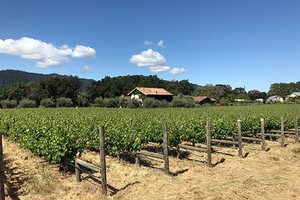